My family past time used to include going snowmobiling. We loved it, that indescribable feeling as you are floating along fresh perfect powder is hard to replicate anywhere, or with anything. Braving that hilltop that you were maybe 50-50 on making it up alive, but when you reached the summit and looked over your conquest amid the whiteness, it’s amazing. Again there are few things that compare and replicate it.

There’s also a certain comradery among the sport, among those who sled that if ever someones in a bind, YOU HELP THEM. Why? Because as we all know, it very well could be you next time. 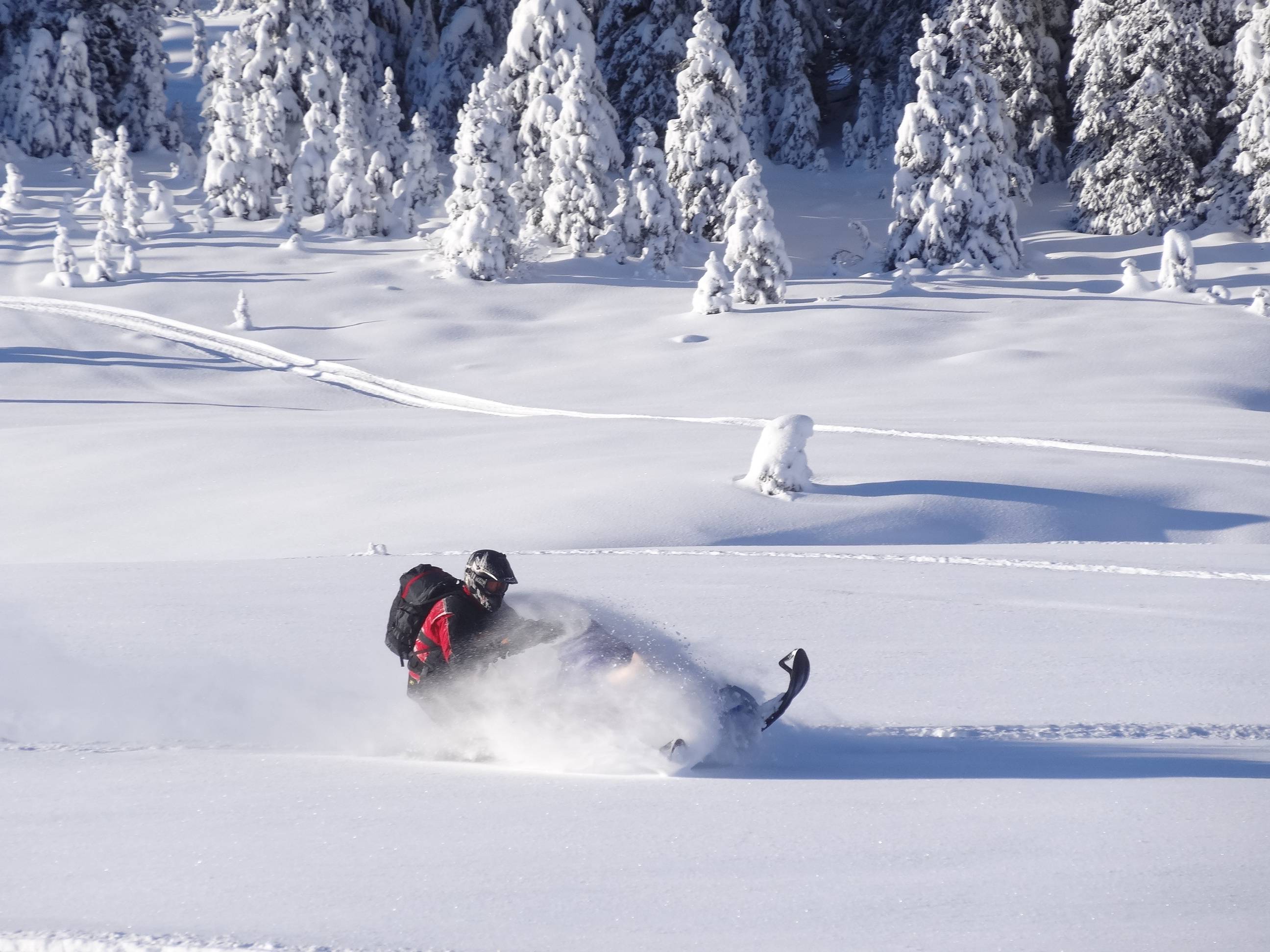 Now before I get to the cliff story, I remember a time when I had jumped my sled into a bowl, not realizing the depth of it and getting terribly stuck. And when I say stuck, I mean buried beyond all recognition. Despite a couple hours of digging we were no where near getting it out. And that’s when the cavalry arrived. Word had gotten back that someone was stuck pretty bad, and no less than 4 additional snowmobiles had been dispatched to help us get out. Four different people who we didn’t know. But the funny part was it was kind of fun, all of us there trying to will this snowmobile out of it’s predicament.

After a little effort we were able to retrieve it, and thanks were offered and goodbye’s said. All of the thanks were responded to with similar answers like “that was me a couple of weeks ago” or “I’ve been there before” and “it’ll be me next time”. I truly do miss snowmobiling for a host of reasons, but the helpfulness of it’s participants is a big part of it.

Alright, now to the cliff story. (that picture is obviously not of this story, I figured an incredible shot of powder sledding would be more appropriate). My brother and I were out enjoying ourselves sledding along a groomed trail with a huge vantage point. The groomed trail followed a ridge line and had several places where you could jump it to get up on top to see the view. I was below banking in the deep powder, when I looked up and saw my brother walking without his sled. Which was unusual…so I headed his direction. When I came up to him I asked him “where’s the snowmobile?” and his wordless response confirmed my every fear, he raised both of his hands above his head and then threw them to his knees. (yes I interpret sledding sign language, this particular sign meant “we are so freaking dead, our dad will never forgive us, we were probably adopted” aka “the sled went over the cliff”).

He had misjudged and not inspected his jump point before proceeding and once he’d hit the summit saw nothing underneath him but death, and he bailed. Luckily he was fine, although the sled was…actually we’ve never found the sled. It fell 2,000 ft to it’s glorious demise among the rocks. A fitting end to a faithful and long lived Polaris career. It landed in an area that’s literally impossible to retrieve it, so there it lies.

Luckily my father took it in stride, so there was no “off to gallows” for us this time, although it probably was deserved. And that’s why my family doesn’t go snowmobiling anymore.

This site uses cookies. By continuing to browse the site, you are agreeing to our use of cookies.

We may request cookies to be set on your device. We use cookies to let us know when you visit our websites, how you interact with us, to enrich your user experience, and to customize your relationship with our website.

Click on the different category headings to find out more. You can also change some of your preferences. Note that blocking some types of cookies may impact your experience on our websites and the services we are able to offer.

These cookies are strictly necessary to provide you with services available through our website and to use some of its features.

Because these cookies are strictly necessary to deliver the website, refuseing them will have impact how our site functions. You always can block or delete cookies by changing your browser settings and force blocking all cookies on this website. But this will always prompt you to accept/refuse cookies when revisiting our site.

We fully respect if you want to refuse cookies but to avoid asking you again and again kindly allow us to store a cookie for that. You are free to opt out any time or opt in for other cookies to get a better experience. If you refuse cookies we will remove all set cookies in our domain.

We provide you with a list of stored cookies on your computer in our domain so you can check what we stored. Due to security reasons we are not able to show or modify cookies from other domains. You can check these in your browser security settings.

We also use different external services like Google Webfonts, Google Maps, and external Video providers. Since these providers may collect personal data like your IP address we allow you to block them here. Please be aware that this might heavily reduce the functionality and appearance of our site. Changes will take effect once you reload the page.